Lipika had filed a complaint of domestic violence with the Delhi Commission for Women on June 10 alleging that her husband had been abusing her since their marriage in 2010. She had also given a complaint to the police in this regard. Delhi Police then registered an FIR against Bharti under sections 307 (attempt to murder), 498A (cruelty towards wife), 324 (voluntarily causing hurt by dangerous weapon), 406 (criminal breach of trust), 313 read with 511 (attempt to cause miscarriage without woman’s consent), 420 (cheating) and 506 (criminal intimidation) of IPC. 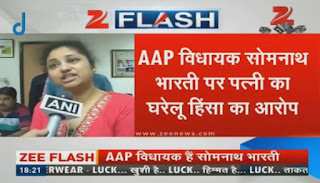 AAP MLA Somnath Bharti was arrested. he surrendered in connection with the attempt to murder and domestic violence case filed by his wife.
He was arrested around 4 AM, Dependra Pathak, Joint Commissioner of Police (Southwest) said. 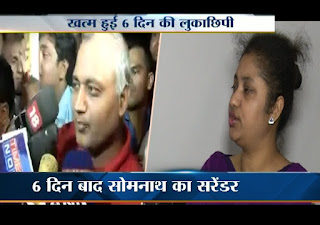 Bharti, who evaded arrest for nearly a week, had surrendered last night hours after the Supreme Court ordered him to give himself up in the domestic violence and attempt to murder case filed by his wife. 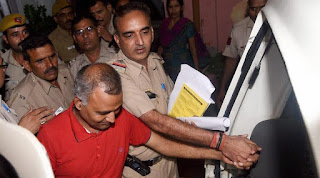 AAP MLA and former Delhi Law Minister Somnath Bharti was today sent to Tihar Jail for a day by a Delhi Court, .